DETAILED and improved analysis of knife crime statistics has appeared online this year – and it shows a clearer picture of the issue compared to some 15 years ago when I first started taking a long, hard look at what was measured and reported.

As I said then, it is nigh on impossible to best manage without measurement. So, rather than wait for the Government and police to provide better analysis and communications of a general increase in knife crime over decades, the BBC seems to have got organised to do it.

As well as better analysis, the results look to be actionable statistics.

The top line figures are about knife crime in England and Wales rising to record levels in 2017-18 with fatal stabbings highest since records started in 1946.

Earlier this decade, I reported that some decrease in knife crimes had occurred. However, I did express skepticism because the steady fall led up to election times (a problem being solved will help win political votes of course – or not lose so many).

Sure enough, up to the general election of 2015 numbers were falling. As soon as Theresa May left the Home Office to become PM, those knife crime stats for England and Wales started to soar. 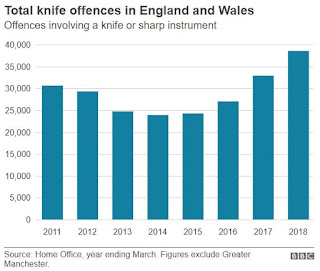 Here’s how the BBC has set out the various key knife crime reporting on various of its website pages:

(I have been campaigning and fundraising to prevent knife crime since the early 2000s after rushing to try to help a fatally stabbed McDonald’s supervisor.)

This entry was posted in Uncategorized. Bookmark the permalink.

This site uses Akismet to reduce spam. Learn how your comment data is processed.